The English Ensemble Stars Wiki
Register
Don't have an account?
Sign In
Advertisement
in: Characters, Eden, Class 3-S !!,
and 11 more

"I'm gonna do things my way, and I won't take shit from anyone~"

"Honestly, I feel like I'm a servant of a selfish princess..." 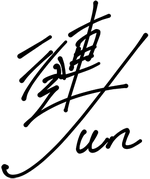 THE STAGE -Track to Miracle-

Starry Stage 4th
Through his father's former past as an idol, Jun has a deep connection with Jin Sagami. He is diligent and passionate in nature, but turns foul-mouthed whenever he has to deal with Hiyori Tomoe. Singing with a husky voice akin to rippling waters, he delivers performances charged with energy.

He is currently a member of Cosmic Production's Eden.[1]

I'm Jun Sazanami, and I belong to a unit called Eden from COSMIC PRODUCTION. Let's see... My specialty is tennis-playing, and I spend most of my days off reading. ...Is that a bit too ordinary for an idol? Besides my personal life, I'll tell you about my charms in my live performances and work, so please take a look at those. Eden is the pinnacle of the modern idol industry. As a member of this unit, I'm giving my best effort, and I'll make you crazy about me. ♪[1]

If His Excellency and His Highness are the light of Eden, then I suppose myself and Jun are the shadows that accompany them. But recently, he seems to be growing day by day as a shining idol himself. Well, I envy him! Unlike Jun, I have a great deal of work to do, like running my company and management work! ...No, of course, it's a pleasure, yes? It is my sincerest hope that this "pawn" will continue to become stronger. ♪ Hahaha! ☆[1]

A second-year student at Reimei Academy. Despite his calm demeanor, he keeps a certain distance from people. While being swayed by the free-spirited Hiyori, he will seriously accomplish any job he's told to do. A member of the units Eve and Eden.

Due to his school's hierarchy-focused structure, he speaks very politely to others in work-related environments. He is otherwise casual and tends to be sarcastic, especially regarding any treatment he endures from Hiyori.[2]

Jun is a young man of average height with a good build. He has spiky dark-blue hair with bangs that cross in the center. His hair is cut shorter, ending right bellow his ears. He has light-golden eyes.

Known for his calm and polite attitude towards others when working, Jun maintains a good reputation and fits in well with the face of society. Although his public appearance of being polite and level-headed is well known, he can be extremely sarcastic and backhanded in nature once no longer in the public eye. He's passionate in his work of being an idol, and is known to be great at what he does. However, he is also seen to be foul-mouthed and sarcastic when working with Hiyori Tomoe, since he has to deal with his eccentric and bold personality.

Jun's first name (ジュン) in kanji form is confirmed by the Chinese version of the game to be 純, which means "genuine/pure", a reference to his blunt but honest and sincere nature, acknowledged by Hiyori when he calls him 'a noble beast who cannot tell lies'[3]. As for Jun's surname, it translates to "ripple (on water)" (漣). Ripples may come to conception shallowly, but its turbulent waves grow and change as its presence becomes ever more apparent on the water's surface. With a similar stride, Jun leaves a lasting impression on many as he finds his apt identity as an idol.

"At first, I felt as though this character was the type to always drift from place to place, and that he's calm without hurry, but now I have the impression that he has many secrets hidden within his heart. There's kind of a feeling that there's still much more to learn about him, so I look forward to how he'll interact with, and in turn, develop alongside the other characters!" * (Enstars!)

"Jun! As a member of Eve, Eden, and Ensemble Stars, keep showing us your best live performances!!" * (Enstars!!)