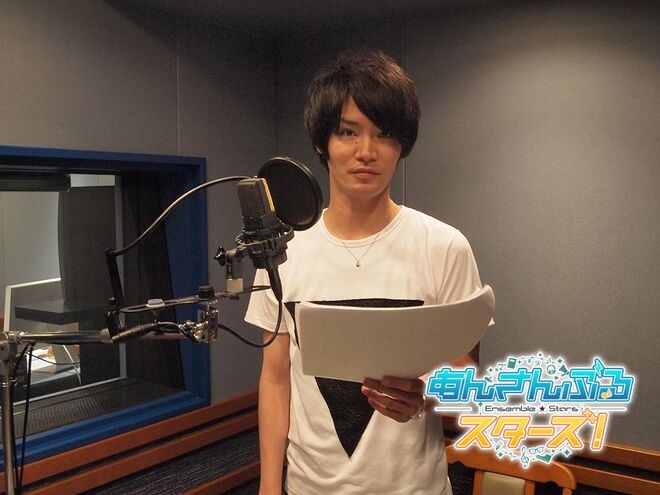 As this is a game about producing idols, I thought that Hidaka-kun is very blessed to be born into an ideal environment for someone who's aiming to become an idol. A real "thoroughbred," with his mother being an actress and his father being an ex-idol himself; at least this was my impression at first.

In terms of personality, I had the feeling that Hidaka-kun is not the type of person whose feelings are easily conveyed through his way of speaking and his expressions. Even though he probably means to go about his way normally, he'd still seem cool and detached to others. But he's not so calm and collected that he remains impassive in all situations.

Also, Hidaka-kun is supposed to be a tsundere according to his settings, but as far as his lines are concerned, I thought he's more like someone who gets embarrassed easily. Whenever he says something, his embarrassment always shows first. My impression is that he's very much your typical boy.

Among his lines, there was none that was immediately identifiable as tsundere. And so while acting, I had a lot of fun experimenting with the different possible nuances; for example, where to sound stubborn, embarrassed, or brusque.

The first line that I recorded was his snorting and then saying: "Nice to meet you." It seems that snorting is his habit. I thought that maybe he's too embarrassed when talking to a girl, and he can't do it without first buffering himself with a snort--this was what I had in mind when I recorded this line. Other than that habit, his speech and expressions are also quite unique. He has this line which goes: "Oh, well," and it's his way of expressing joy. I don't think it's only me whose first impression upon hearing these words is that the speaker is trying to comfort himself, or that he's kind of resigning himself to the situation. And so at first, I didn't know that he's happy when saying this line. I guess it's his own way of expressing his appreciation. I have to admit, he's a little strange (laugh).

Also, when saying happy birthday, he could simply say: "Of course, I do remember your birthday," but instead, what he says is: "I made no mistake," which I find interesting. Since Hidaka-kun is raised by his grandparents, I guess he does get influenced by them. It's not just in his speech--he likes konpeitō. I was surprised that it's not some more common type of sweets. How would he keep those on him? In a jar that he carries around? ...It's rather mysterious (laugh).

Considering that the setting for this work is a high school, what were you like as a student, Hosoya-san?

I was a pretty quiet student during my middle school days, but I became an extremely noisy person once I got to high school. Like Hidaka-kun, I was in the Theater Club while in high school. Since I was encouraged to express my emotions dramatically, talk to our audience, and do random silly things, my voice became louder and louder before I knew it, and then I just turned into this very noisy guy (laugh).

Actually, the Theater Club didn't exist when I first entered my high school. Then, I got asked by my teacher: "Why don't we do a play for the cultural festival?", and that's how I got started in acting. The teacher that I talked about is a very interesting person, and also one of my most favorite teachers, so I thought I'd give it a try. But when I came to practice, it turned out that I was the only student, and the others were all teachers. But they were all very interesting individuals, so I had a lot of fun.

When the cultural festival was over, the teacher again asked me: "I'm thinking about making a Theater Association. What do you think about joining, Hosoya-kun?". I thought it would be an interesting experience if it's with my teacher, and so I became a founding member of the Theater Association. I was a first year student at the time. Aside from me, there were five other first years and six second years, plus one member in charge of the stuff behind the scene. The balance between the boys and the girls was also perfect, and I feel very grateful about that. We got along so well that we were even together on our way to school or back home. I really had a lot of fun during my high school days, and I would say that I was able to fully enjoy my so-called "springtime of life" back then.

I love action games. I play a few series such as Biohazard, NINJA GAIDEN, Assassin's Creed, and Metal Gear Solid. Yes, I'm your typical male (laugh). I also like horror action games, like SIREN. But I guess this is a game that I'd rather play with other people (laugh). The game that I got the most into up until now is Biohazard 5. I've played it 4 or 5 times.

Since this is a game about producing idols, I'm personally hoping for a sequel where the boys have become full-fledged idols. There are so many youthful and charming characters in the game, and I do think that based on the first impression alone, Hidaka-kun is what you would call the quintessential idol. But when you really get to know him, you'd find out all the little quirks about him, like his great attachment to his grandmother, his strange habits of speech, and his penchant for konpeitō. Please take the time to get to know Hidaka-kun.

Retrieved from "https://ensemble-stars.fandom.com/wiki/Interview_with_Yoshimasa_Hosoya_(voice_actor_for_Hokuto_Hidaka)_(March_31,_2015)?oldid=8249"
Community content is available under CC-BY-SA unless otherwise noted.