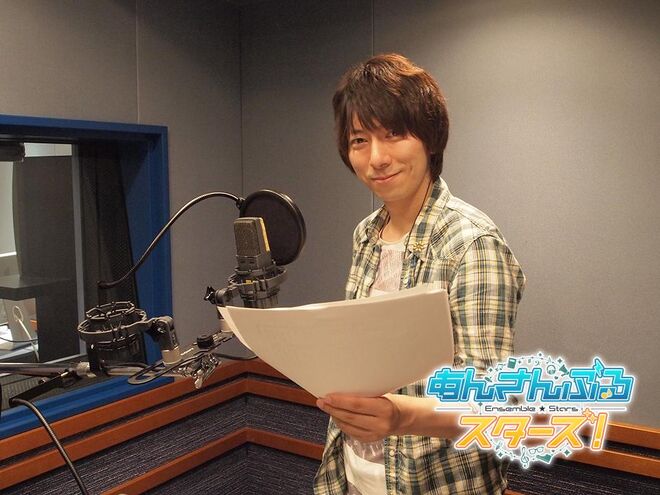 First of all, Adonis-kun seems to me like a reticent and artless boy. When I looked at his appearance from the materials I was provided with, I noticed that he's a healthy-, sturdy-looking boy with a solid build, so I made an effort to make him sound slightly more mature than his age during the recording. Since he has a rather sharp look in his eyes, I also had the impression that he may be somewhat stern; at the same time, I feel that there's something very passionate about him, and he seems to embrace a certain sense of justice, as if he wouldn't hesitate to protect those weaker than him. Although he may seem aloof, it feels like there's always some reason behind his actions. He's a very nice boy.

This doesn't apply to just this work, but when it comes to a work that has a lot of characters, it's quite understandable that each character will have their own personality. There are bound to be cheerful, lively characters, and on the other hand, there are also characters like Adonis-kun, who has a very dispassionate manner of speech. One of the things that I really try to keep in mind when voicing a character like this is to make sure that all the lines don't sound the same. Depending on whom he's speaking to (i.e. whether it's the protagonist, or himself), the warmth of his speech changes, and this is something that I was conscious of while acting.

The more I read his profile, the more I find that he's a very adorable character whose personality is very different from the impression that his appearance gives off. He doesn't show much of his emotions, but he loves looking at small animals, and his specialty is the ocarina--things like that. Although he always keeps a stern expression on his face and hardly ever smiles, he actually has a really cute side to him. I'm sure that he's a character whom the players will enjoy even more as they get to know him more and more.

Considering that the setting for this work is a high school, what were you like as a student, Hatano-san?

My high school days were my darkest days! (Laugh) When I was in middle school, I was involved in sports activities for three years straight, and once a year, we'd have something like a match between the classes, so I stood out quite a lot on the athletic side. But as soon as I entered high school, all of the desires that I'd kept hidden inside became completely exposed... and so I served as the vice-president of the Manga Anime Research Club for two years (laugh).

The high school that I went to was originally an all girls' school, and as a remnant of that, there were a lot more female than male students. Because of that, whenever we had to decide something as a class, the boys never had a say (laugh). That was the kind of environment I was in, and also, the boys in the class tended to divide themselves into groups based on their club activities; for example, those in sports clubs would hang out together, and the same goes for those in cultural clubs. In terms of my own club, we basically just read manga every day and called that club "activities."

Come to think of it, the other day, I got told by a broadcast writer that the male protagonists that I voice tend to be different from those voiced by other voice actors. Then, during the broadcast itself, the person suddenly said: "That's right! It's because you were never popular with the girls during your school days, Hatano-kun!" My first reaction was: "That's so rude!", but then I realized that there's probably some truth to that (laugh). It's exactly because I wasn't popular that my admiration for the popular people became connected to my acting. Maybe that's a source of inspiration for me. But I think that unlike me, Adonis-kun is a totally popular boy! (laugh)

I do play when the games are recommended by my friends and acquaintances, or when I receive the complete version of the games that I provide the voice for. One game that I was really impressed with while playing is Ore no shikabane wo koete yuke 2 (Over My Dead Body 2), which is one of the games that I voice acted for. What was interesting about that game is that when you first start the game, you can take a picture of your face, and then a character with a face exactly like yours would appear on the screen. This character would become the protagonist, and the game would start from there. Since I provided the voice for one character (of the family) in the game, I was so sure that my protagonist would have my own voice, but then it turned out to be Maeno (Tomoaki)-kun's voice! (Laugh) And when I told Maeno-kun about this, he said that his character (with his face) had my voice! It was funny that our faces and voices were mismatched.

In this game, there are truly a lot of cool-looking boys. Among them, Adonis-kun is a mix-raced character, so his looks are somewhat exotic, but he's very gentle, and he also has something very passionate about him. Since he's not so good at expressing his thoughts, the players may wonder if he truly cares about them, but please rest assured. As you get to know him more and more, you'd find that he's very cute, what with his gentleness, his strong sense of justice, and his trying to make you eat meat all the time. I hope everyone will enjoy the game.

Retrieved from "https://ensemble-stars.fandom.com/wiki/Interview_with_Wataru_Hatano_(voice_actor_for_Adonis_Otogari)_(March_27,_2015)?oldid=8247"
Community content is available under CC-BY-SA unless otherwise noted.