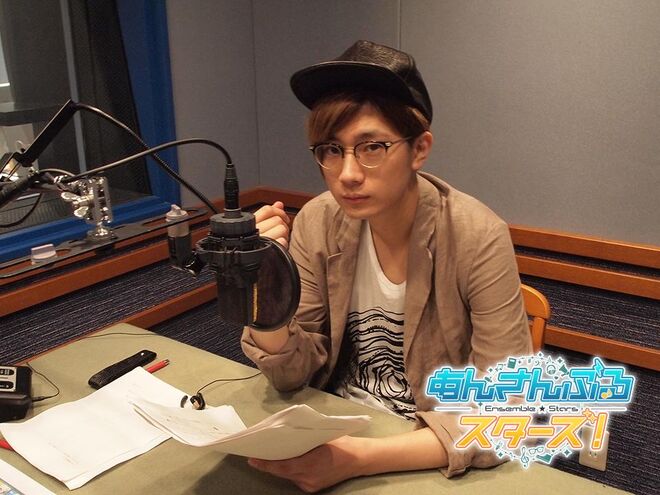 Hibiki-san is a character who has a very unique world-view, unfathomable to others. Since he's the president of the Theater Club, one of his characteristics is that his behaviors are very dramatic, even in daily life. Moreover, he's also an idol, and actually a talented one at that... so I kept these considerations in mind as I acted his character.

Also, as Hibiki-san's catchphrase in his setting is "weirdo-pretender," I really wanted to bring out that degree of weirdo-ness (laugh). If you just look at his appearance without paying much attention, then he doesn't seem that weird, but when you look closely, you'd notice some of the peculiar things about him, such as how his hair is silver, but only the tips are blue, or how he only drapes his blazer on his shoulders. Moreover, look at the length of his blazer (laugh). I think his appearance also reflects his "weirdo" quality.

The one question that I constantly asked myself was: "How can I make this line sound strange?" Since I tried to create for every line a nuance that suggests that the person speaking is a weirdo, I would be very happy if the players become surprised at hearing these lines. After all, "surprise" is one of Hibiki-san's main themes, and "amazing" is his favorite word.

Among his lines, the one that left the deepest impression on me is: "Let us fill this whole world with love." I actually have the feeling that he really does feel this way. That it's a line that only he can say. And so I tried speaking it with a sincere tone.

It's true with the line that I just quoted as well, but it's like Hibiki-san is completely absorbed in the sound of his own words (laugh). It's as if he only speaks for himself, without caring much about the other person's reaction. For this reason, I think he essentially treats everyone in the same way, be it the heroine, his friends, or his underclassmen, maybe? And so overall, I tried to act in a way that suggests that he doesn't view the protagonist in any special light.

Considering that the setting for this work is a high school, what were you like as a student, Eguchi-san?

My high school days weren't so "amazing" as Hibiki-san's (laugh). I was the type of student who'd take a nap throughout the lunch break. And of course, I'd doze off during class time as well (laugh).

During the 11th grade, I started becoming interested in the line of work that I'm in now, and so I began losing interest in all aspects of my personal life, starting from my own schoolwork, and I just wanted to graduate as soon as possible. You see, I had always loved manga, and I watched anime regularly as well, but I was very bad at remembering the characters' names. And that's why I didn't even have much of an awareness of the people who gave the voice to the characters. Basically, I only cared about whether the content was interesting or not.

But then during the 11th grade, I listened to a radio broadcast by the Nippon Cultural Broadcasting company, and there were some people whom I thought were very interesting. Then I found out that they were voice actors, and that was when I first became interested in voice actors. When I did more research, I found that they had voiced many of the characters in the anime I'd watched or games I'd played, and everything became even more interesting. Long story short, during my high school days, I became interested in voice acting thanks to a certain radio broadcast.

I've been playing the Monster Hunter series for a long time. Last summer, I even went to the "Monster Hunter 10th Year Anniversary Exhibition" at Shibuya Hikarie. I was also invited to the pre-release introduction meeting for Monster Hunter 4. Other than this series, I occasionally play game apps for smartphones.

Since the character I was assigned is supposed to be a "weirdo," I tried out all kinds of fun things during my recording. His speech is very unique, and he has a lot of quirks, so I was wondering how far I was allowed to go with my experimentation, but it turned out that everything was OK'ed. Actually, my recording sessions went so smoothly that I had to ask myself: "Is it really OK like this?!" (laugh).

Since I was truly allowed a lot of freedom, I feel that Hibiki-san's uninhibitedness was displayed to the fullest. That's what I really want the players to listen to. There are many, many "amazing" lines scattered at every turn of the story, so I hope everyone will play the game and experience an "amazing" feeling. Thank you very much!

Retrieved from "https://ensemble-stars.fandom.com/wiki/Interview_with_Takuya_Eguchi_(voice_actor_for_Wataru_Hibiki)_(March_27,_2015)?oldid=8248"
Community content is available under CC-BY-SA unless otherwise noted.