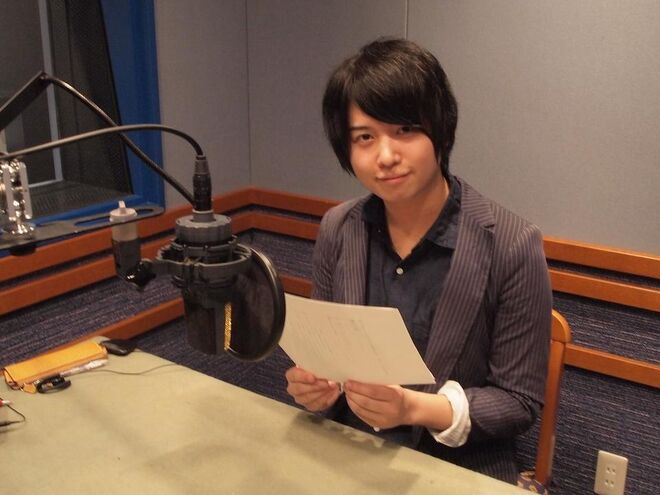 What is your impression of your characters?

The two characters that I'm in charge of are a pair of twins, so their appearances are very similar. Hinata-kun, the older twin, is what you'd expect from an older brother. He's proactive, extroverted, and always cheerful. Yuta-kun, the younger twin, gets along well with Hinata-kun, but he dislikes being similar to his brother in everything. Compared to Hinata-kun, Yuta-kun is slightly more mature, and his lines tend to be more calm and quiet. In his lines, I can pick up on something like his own personal charm... He's a boy in his puberty after all, so I suppose he must have many complicated feelings (laugh). But in the end, they're still essentially a pair of brothers who share a playful and harmonious relationship. Hinata-kun has a line which talks about how he's searching for his brother, and on the other hand, Yuta-kun has a line which says: "I've evaded my brother" (laugh). I really like the relationship between these two.

What was your experience like, voicing these characters? Please also tell us about what you specifically paid attention to during the recording.

Since in the setting, they look so similar that they can even switch places and attend each other's lectures, it was hard for me to figure out how similar I can make them, and where I should draw the distinction. Of course their appearances are similar, and they also tend to be the same in the things they like, but when I saw their lines, I really thought that each character has his own differences as an individual. And so I decided to portray their differences in the nuances of their lines instead of in their voices.

Since I was in charge of voicing both of them, I thought that it would actually be more interesting for them to have the same voice. Even when their voices are the same, everything is still different. Also, there are cases where I intentionally make them exactly the same. For example, when they are surprised and automatically react to something, I don't think they can control their reaction, and perhaps it would end up being very similar. I would be very happy if the players would keep an ear out for those similarities and differences.

Considering that the setting for this work is a high school, what were you like as a student, Saito-san?

I'm not really the noisy, gregarious type, and I mostly just did everything by myself. For example, during lunch break, I was not really the type to join a game of soccer. Rather, I'd read a book at some quiet corner, since I do enjoy reading. Everyone was nice to me, though, so they just accepted my presence in the bigger group whenever I was up for it; otherwise, I was left to my own devices. My high school days were quite enjoyable.

I wanted to join a light music club during high school, but the school I went to had no such club, and I kind of envy Hinata-kun and Yuta-kun. If I could go back to high school once more, I want to join the light music club like them and have fun making music with everyone. By the way, even though I couldn't officially join a music club during high school, I did form a band with my friends, and we even performed outside of school. But then again, it's not the same thing as forming a band as a club activity in high school. To me, that's the ideal picture of the "springtime of life" (laugh).

Since there was no light music club, I was in the Literature Club and Broadcasting Club instead. Yes, I was the typical art and literature guy! (laugh) Back then, I wanted to act with my voice, so I entered the Broadcasting Club to learn more about it. Both the clubs that I joined had a lot of girls, but since I liked shoujo manga, we lent each other our books... and I fit right in with them (laugh).

Also, I'm the oldest son, and I have two little sisters, so I do wonder how fun it would be if I had a male sibling and attended the same school as him, like Hinata-kun and Yuta-kun. Of the two, I'm closer in personality to Yuta-kun. If I had an older brother like Hinata-kun, I imagine it would be like him going: "Let's go somewhere!", and then I would begrudgingly oblige while actually feeling happy inside. I really envy these two's high school life.

It so happened that portable gaming devices started becoming widespread right during my childhood. Back then, the games were still black and white, and I played the first generation of Pocket Monster quite often. When I was small, I really liked RPGs, and I did play a lot of games.

Right now, I'm voicing for the TV anime version of the card game Future Card Buddyfight, so after the weekly recording session, I'd go out eating with my colleagues, and we'd have a card battle! I haven't touched a card game in 10 years, but I've started getting back into them recently.

During my own time in high school, I got to know all kinds of people and experienced all kinds of things. There were obstacles along the way, but I also grew up in the process. Ensemble Stars! depicts a similar situation where the protagonist gets to know all of the characters in the game, and through that, she has an opportunity to embark on an adventure that holds many promises. I truly hope that everyone will enjoy the game!

Retrieved from "https://ensemble-stars.fandom.com/wiki/Interview_with_Soma_Saito_(voice_actor_for_Hinata_%26_Yuta_Aoi)_(March_31,_2015)?oldid=8272"
Community content is available under CC-BY-SA unless otherwise noted.