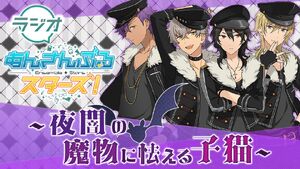 Ensemble Stars! ~Little Kittens Frightened of the Devils of the Night~ was a radio program that ran every other Monday from April 13th, 2015 to May 25th, 2016. Individuals could tune in to listen to the program for free.

This is the radio program for the mobile idol-producing game Ensemble Stars!, set to be released in Spring 2015. The setting is Yumenosaki Private Academy, a school located on a hill facing the ocean. Specializing in boys' idol training, the school has a long history of producing generations of idols for the entertainment world out of the young men overbrimming with talents, like the shining stars in the sky.

Among the characters you'll find there is UNDEAD, lauded as the most rebellious and wicked idol unit of the academy! The wild, (self-proclaimed) "devils of the night" of the unit will take turns to host the radio program ♪ These include Rei Sakuma (voiced by Toshiki Masuda), Adonis Otogari (voiced by Wataru Hatano), Koga Oogami (voiced by Yuki Ono), and Kaoru Hakaze (voiced by Kei Hosogai).

The first session will be hosted by Rei and Koga!

Please send your comments, anecdotes, messages to the characters, etc. to the program via the online form or email address.

Broadcast dates: Every other Monday, starting from April 13th, 2015.

This is basically the listeners' corner, which features all general correspondence from our listeners. We will be waiting to hear from you, in the role of the only female student to transfer to Yumenosaki Academy.

In order to further develop as idols, they must know about what girls like in boys. Please send us your anecdotes of situations in which a boy makes your heart skip a beat, or behaviors that you find endearing, so that the UNDEAD members can use these for their own reference.

Mini-dramas that are only available on the radio show! This is original content that is not featured in the game itself.

At Yumenosaki Academy, "Live your youth to the fullest extent" is the school precept! In this corner, we welcome submissions that recount memorable episodes from our listeners' student days. Each time, we will share one such story with all of our listeners.

The radio show will additionally be released as CDs under Overlap

Retrieved from "https://ensemble-stars.fandom.com/wiki/Ensemble_Stars_Radio?oldid=163904"
Community content is available under CC-BY-SA unless otherwise noted.