Ensemble Stars is a card collecting game that requires simple strategy, but leans mainly towards interaction with the characters and stories.

A key feature of the game is that, unlike many idol-themed games, it is not a rhythm game. According to the creators, they wanted to make a game that did not involve "skill" per se, but rather was able to be played and enjoyed by anyone. As such, the main focus is the story of the game, hence the simplistic nature of the gameplay.

Learning to strategically use your resources and time, in order to maximize your cards' strengths and optimize your teams, is the key to success in Ensemble Stars. Of course, luck is a component of the game, as with most card collecting games of this nature.

This guide serves as a compiled resource to help you understand the main mechanics of the game. If you are completely new to Ensemble Stars, and have just downloaded the app, you might want to check out the Tutorial Guide first! Clicking that link will bring you to a step-by-step guide on how to complete the in-game tutorial. And, of course, if you are looking for more information on a specific mechanic, feel free to look at the Guides page!

The links with a # will lead you to a different heading in the page. Any other links will direct you to other pages on the wiki, or outside resources.
(For example, #How to Download the Game: will lead you to the first header.)


Note: Some pictures have translations edited in for easier reading--they do not actually appear that way in-game.

If there's any information missing, feel free to leave suggestions in the comments!

While these achievements are not mandatory to complete, they provide helpful bonuses to beginners such as producer points (for scouting and leveling up your cards) and jewels (for idol road completion). All tiers of these bonuses are listed below.

How to transfer Game Data to another Device

How to Redeem Codes

More information on items can be found here

Lessons are the main way to level up your cards and increase your rank.
See the Lesson Category page for a detailed list of all available lessons.

See Scouting for a page of the current ongoing scouts 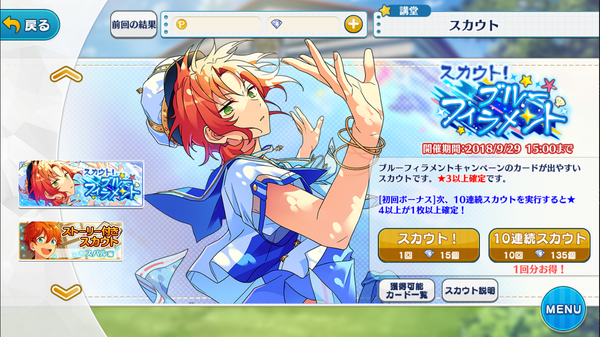 Officially, it is called a Campaign Scout, but many tend to refer to it as the Event Scout, or simply just as the newest Gacha.

A new Campaign Scout opens 1 day before an Event starts, and ends at the same time the Revival Event period does (about 4 days after the main Event ends). The end date and time are displayed in red. 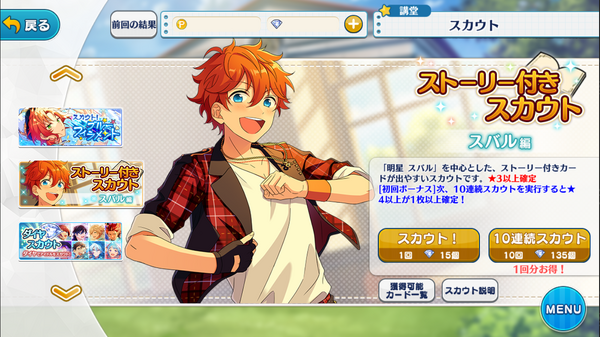 See a list of past Story Introduction Scouts here. 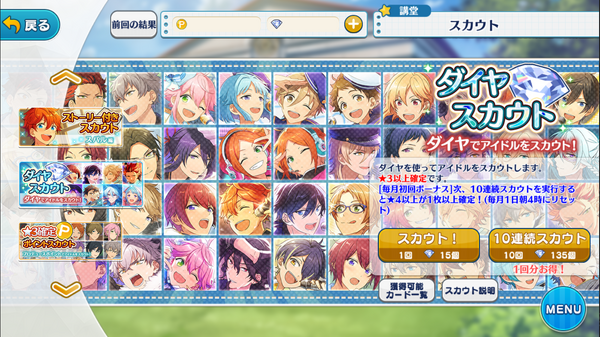 Also referred to as Regular or Dia Scout/Box. 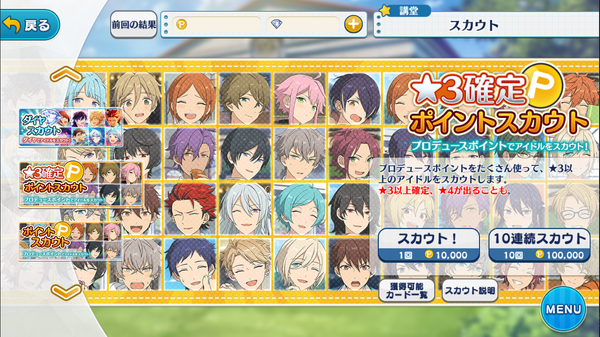 Note: There is no difference in rarity rates whether you scout once or 10x in the Scout. There are also no rarity guarantees either. Therefore, there is no advantage to saving 100,000 Producer Points to do a 10x Scout.

Beginners are encouraged to Scout in this box to build up their teams. 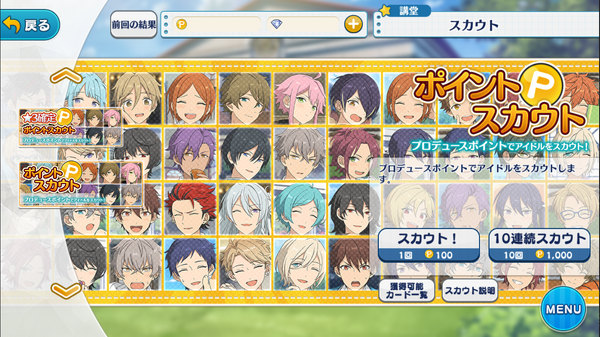 How to check Scouting History

See Special Campaign category page for a list of past campaigns.

The Enstars Reddit has some great strategy guides on their site, see their master post of them here.

Some notable ones are: