Troublemakers - 23
Seisou Hall (星奏館 seisoukan, lit. Star Harmony Building, sometimes translated as Starmony Dorm) serves as the dormitory for Ensemble Square idols. Housing at the dormitory is free. While it's not mandatory by ES policy that ES idols must live in the dorms, it is expected that they do.

While the dorm appears to have certain rules, the only currently known one is that women are not allowed into the dorms, and that they evidently cannot go any further than the gates. Pets are allowed to be kept in dorm rooms.

Upon entering the dorms, characters are assigned roommates. Please see below for the current assignments. 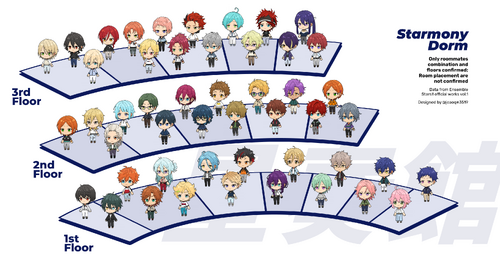 During the the first main story, some idols were living in a different area, and some other idols only began living in the Dorms at a certain point in the story.